If these old walls could talk, oh, the love stories they've seen..

Olde Dobbin Station is family-owned by the McCoys.

The McCoy’s are excited to breathe life back into these old buildings through weddings and special events. During the restoration process, the McCoy’s maintained as much of the original structures as possible, down to 100+ year old concrete walls.

To date, Olde Dobbin Station has hosted over 500 weddings and special events, and continues to wow guests and clients with its story and charm. Olde Dobbin Station is one of the only historic wedding venues in the Montgomery and North Houston area. It has been featured in numerous wedding magazines, and been voted as the number one venue in Texas.

The wedding venue includes the main hall, dubbed McCoy Station, the indoor Chapel, an outdoor ceremony site, a Bridal suite, and the Groom’s quarters. It can hold both indoor and outdoor wedding ceremonies. 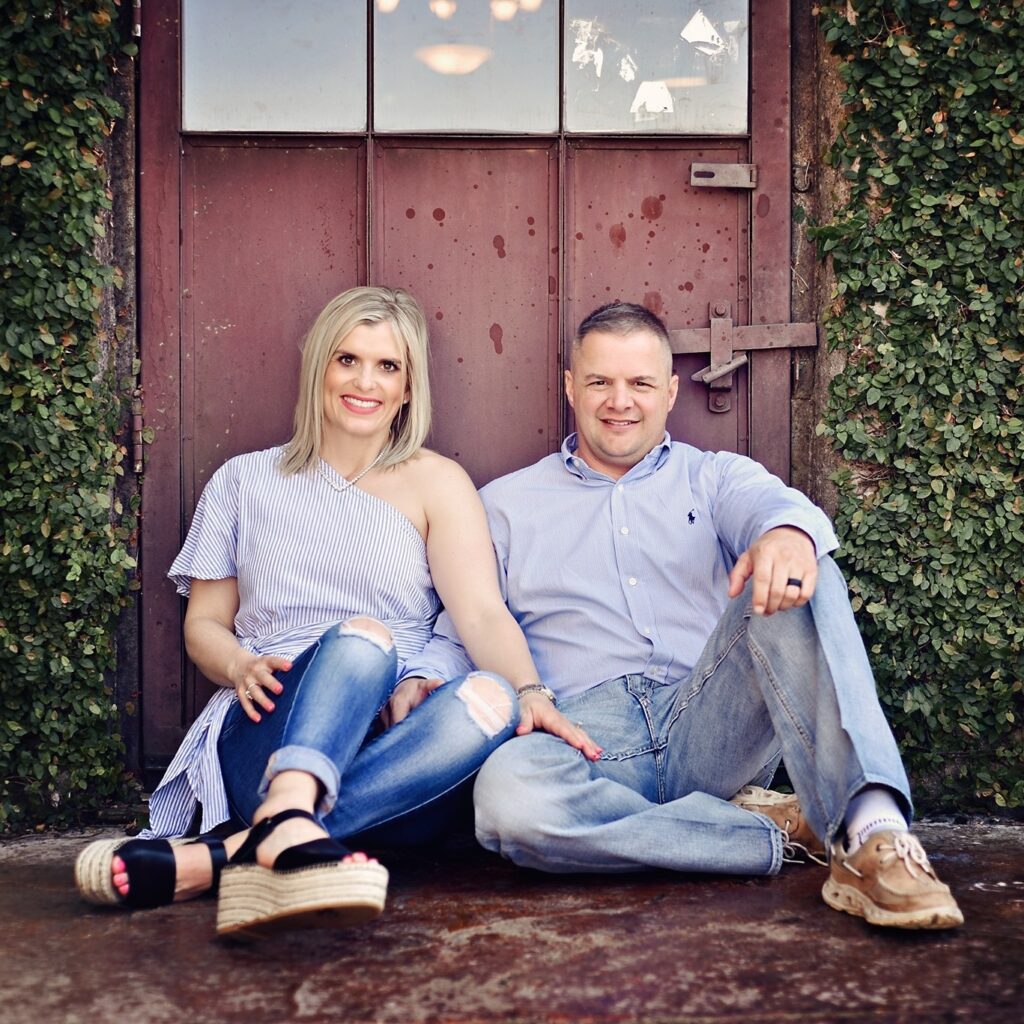 Carrie and Robert McCoy stepped foot into Olde Dobbin Station and felt the grandeur of 100 year old concrete walls. The two of them immediately had a vision to restore the space for celebrations.

Carrie tastefully designed the bar, walkways, stone paths, and bridal suite with a vintage but timeless glamour. When you visit, you’ll notice touches here and there, especially in the dressing rooms.

Rob is Olde Dobbin Station’s main handyman, in that his bare hands built the doors to both buildings, among many other small projects in the venue. Handcrafting is his hobby and together, he and his wife made something really unique.

The History of Olde Dobbin Station
August 2010
Officially The McCoys 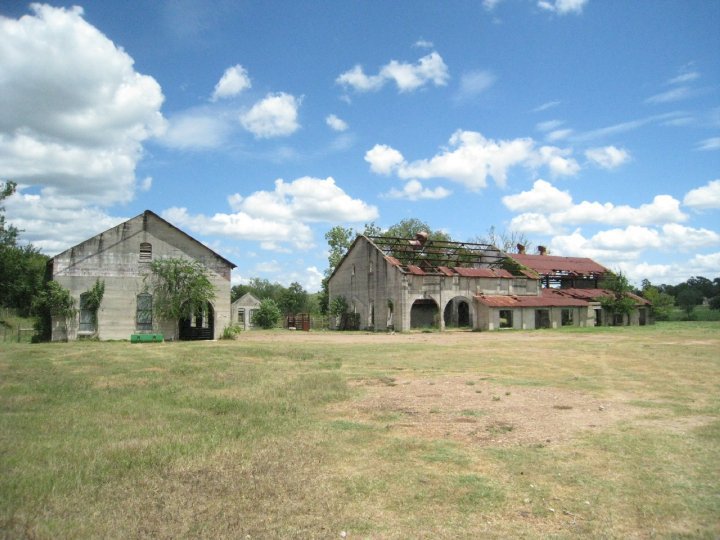 The land and buildings officially became property of the McCoys and the plans for the future of these spaces began.
December 2010
Renovations Begin 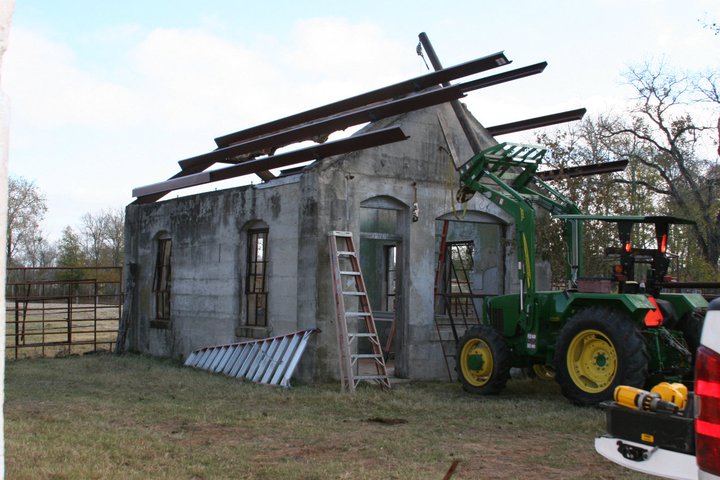 The dressing suite began being prepped for a new roof. This building is what housed the gauges and valves that ran the main pump station.
It's original to the property and many of the dole rods and hooks, can still be seen in the walls in the building.
The McCoy's salvaged what metal they could to use in the renovation. They kept as much of the original structure in tact as possible for all buildings - while also making sure it was sound and secure.
February 2011 - June 2011
All structural steel replacement complete. 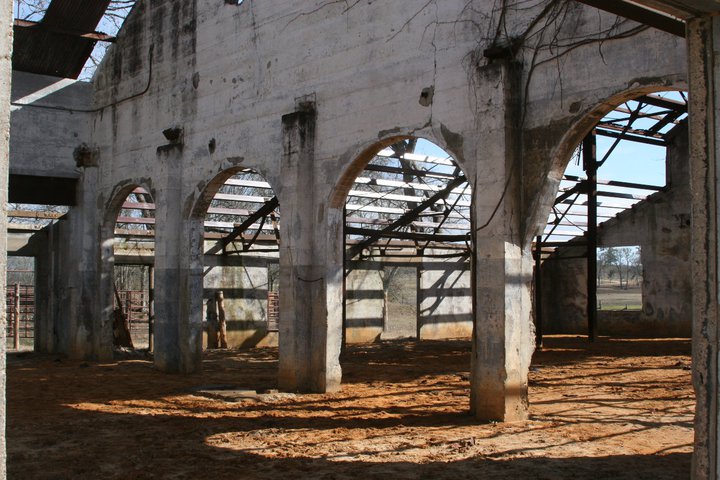 All the structural steel replacement complete, and floors leveled out.
The dressing suite roof gets added during this time as and it is officially named Hunter's place after their oldest son.
June 2011
New Roof complete, finishing out 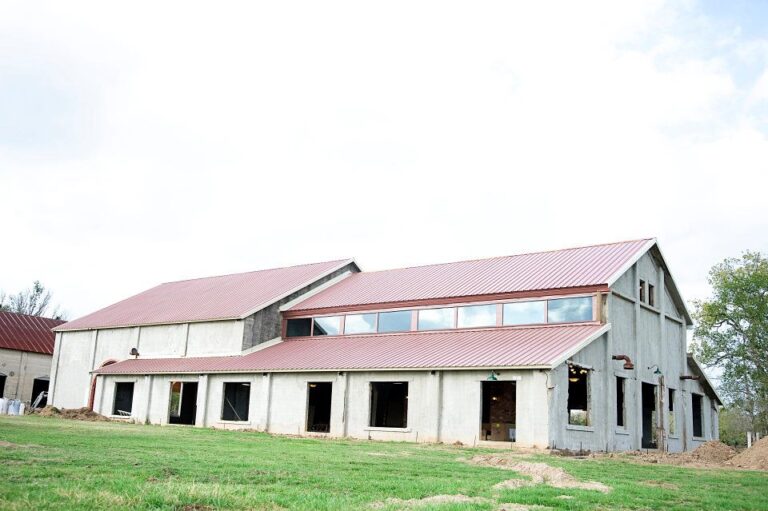 The new roof is complete and bathrooms begin construction. 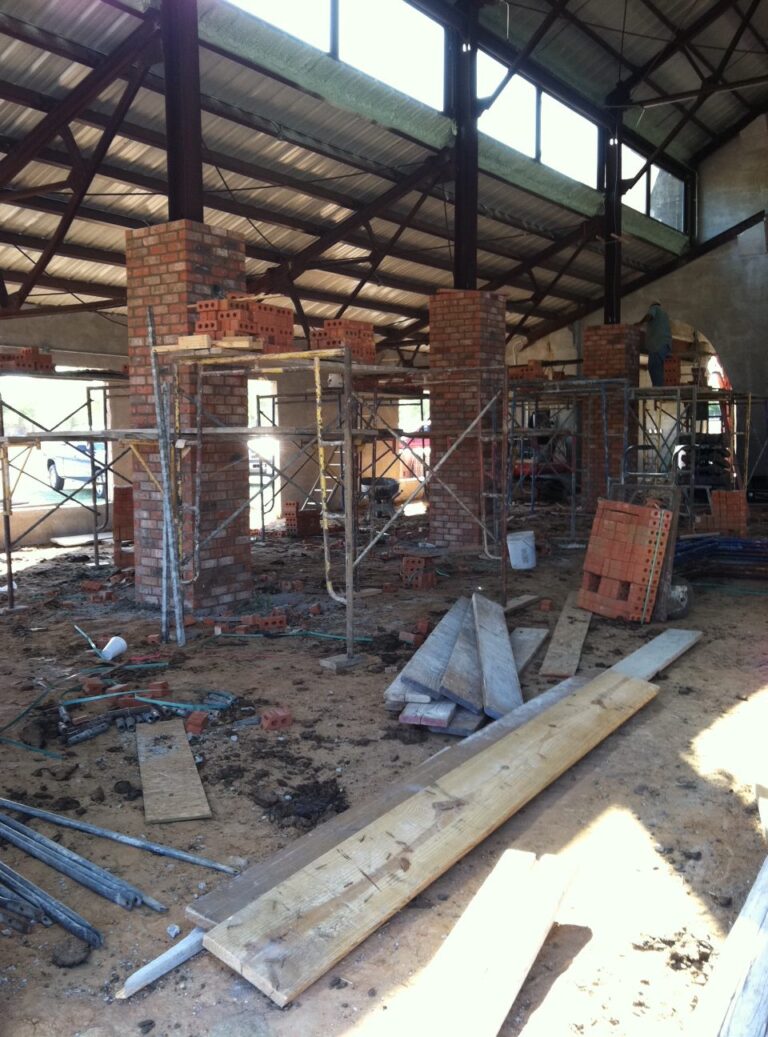 The brick columns are built around the original steel structures.

Process begins for custom metal window frames for all the spaces, to tie in those original steel elements. 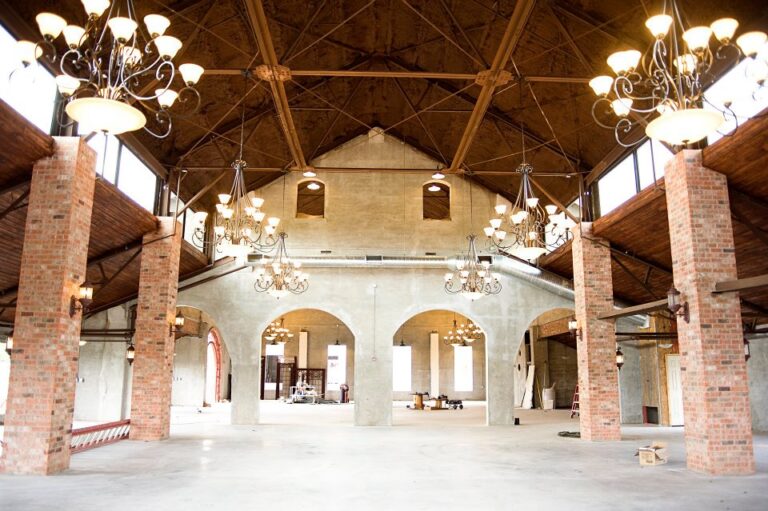 With the brick work around the columns completed , and the concrete floors poured, the Chandeliers make the  room come to life. 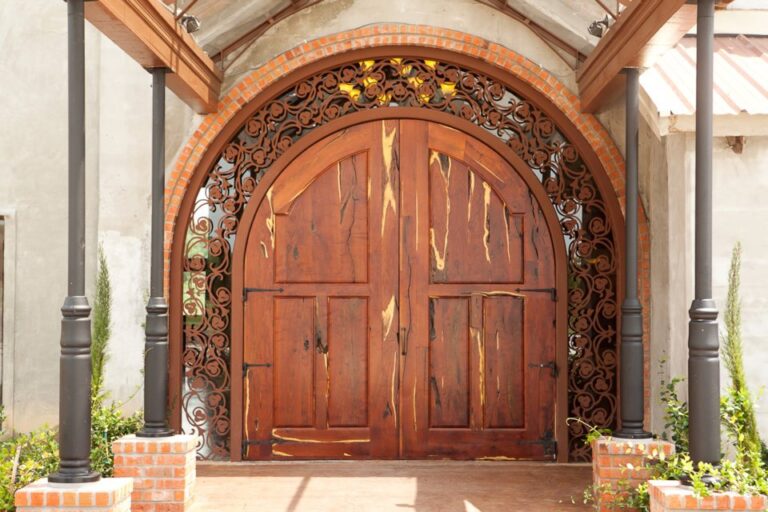 The Frame around these doors was custom built into the originally opening, to house these beautiful doors perfectly,
These doors were hand-cut by Rob from their family ranch in south Texas. He brought the trees back, milled them into boards, and custom built them into the opening, for their own unique entry.
All of the wooden doors you see around the property were hand built by Rob, and it just gives these spaces that added sentimental value.
February 2012 - May 2012
Exterior Finishes 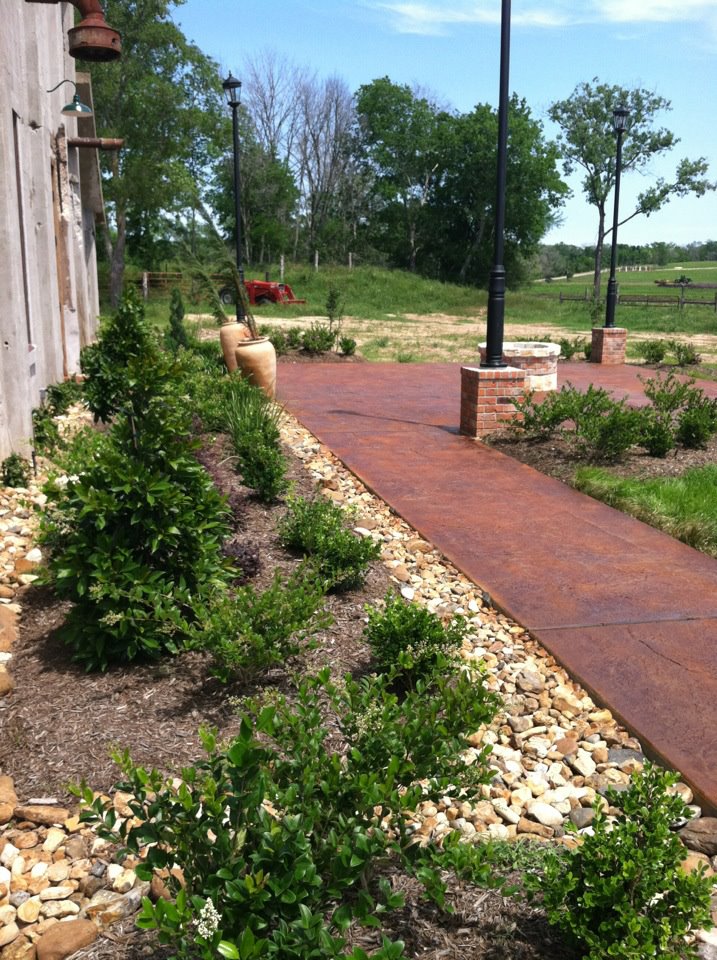 Landscaping begins, the awning is constructed, and the sidewalks are stained. It is a little-known design aesthetic that really makes the outdoor areas stand out with the building. The parking lot was also poured.
May 2012
The First Wedding 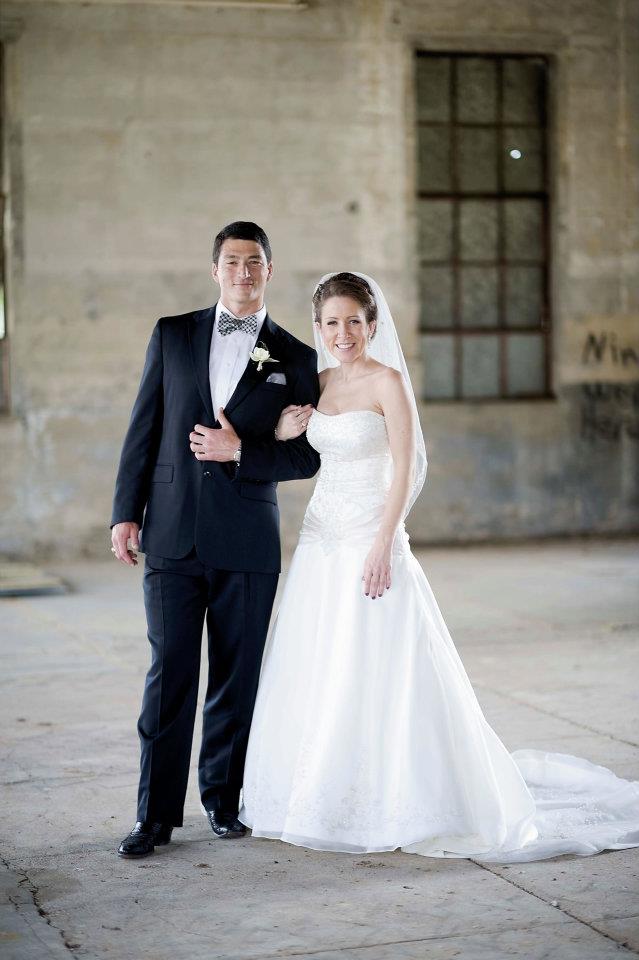 The first wedding was a member of the McCoy's extended family, and it was special for them to choose this space to start their forever!
June 2012
Outdoor Ceremony Site Ready 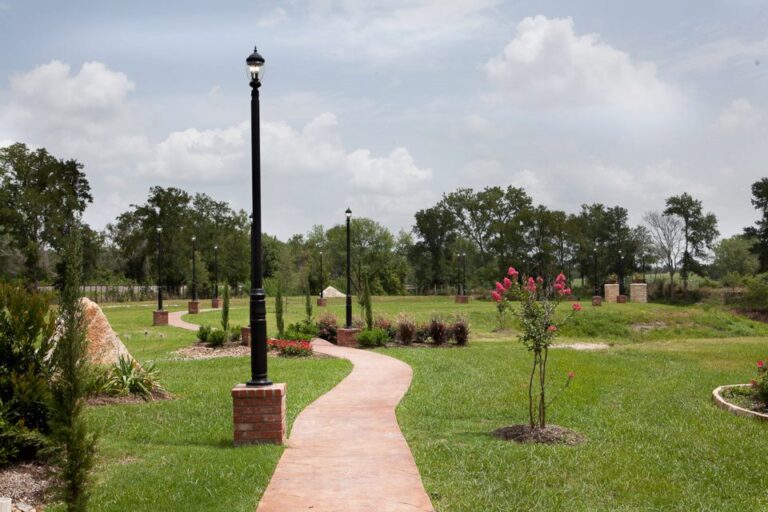 Outdoor ceremony site is officially complete with added landscaping, and ready for all the beautiful nuptials.

Looking back on these images is nostalgic in so many ways. Those beautiful trees have blossomed so much. 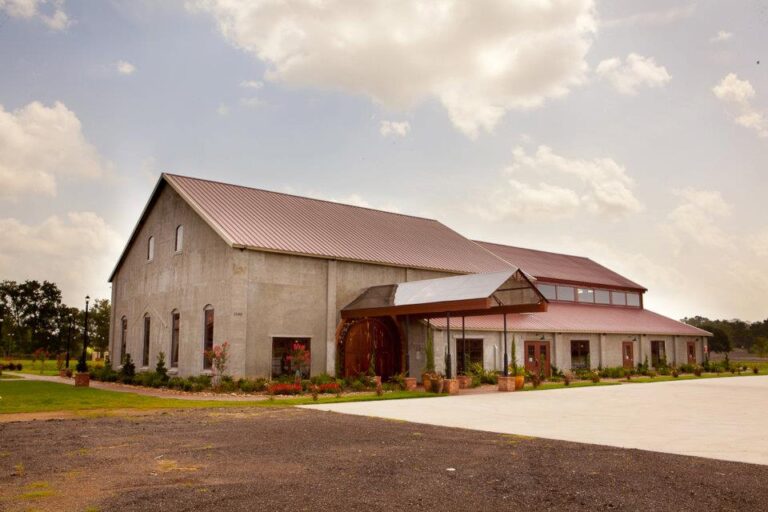 Officially complete and ready for events. Though these walls have greenery that extenuates them now, the underneath is beautiful all it's own. 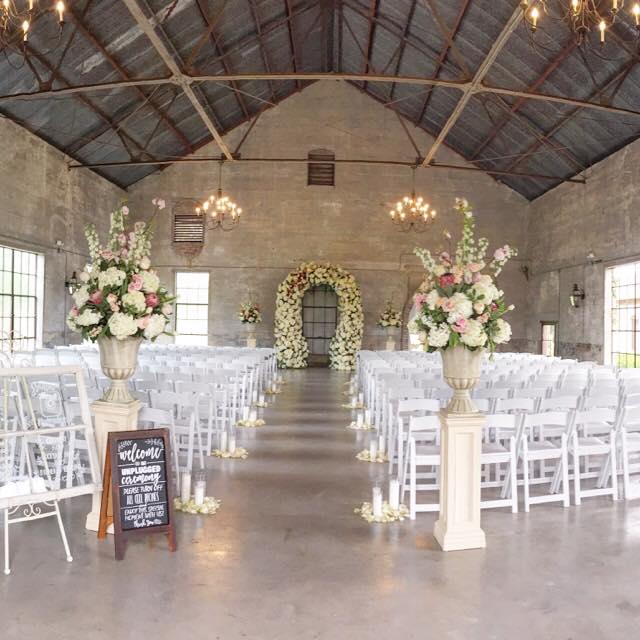 After the Houston/Montgomery area experienced historically damaging flooding, Carrie and Rob decided to renovate the chapel and add on to the back of the building.

In November, they raised the floor in the chapel with fresh concrete, redid the entrances, added a new insulated roof on top of the original, and hung new chandeliers. A second dressing suite was added at this time, officially dubbed Teal's Place, after their second child.

Rob once again hand-carved chapel doors. A welder was commissioned to create windows as close as possible to the original structure.

Bringing life back into this space, was the added touch Olde Dobbin needed to enhance wedding days that much more.